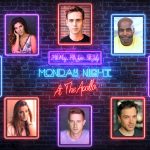 Elton John: It’s A Little Bit Funny tells the incredible story of Elton John’s rise and fall (and rise again) as one of the most successful singer/songwriters ever.

What would you do if you got the chance to meet your all-time hero? That’s exactly what crossed the mind of Manchester’s Martin Kaye when he found himself performing in Las Vegas at the same time as Elton John a few years go – Kaye as Jerry Lee Lewis in Million Dollar Quartet and John in his The Million Dollar Piano show.

It is this concept that has formed the basis for Elton John: It’s A Little Bit Funny, a new show starring Kaye that comes to The Bowdon Rooms in Altrincham from Monday 19th – Saturday 24th July 2021.

The show tells the (imagined) tale of one extraordinary night in Las Vegas when Elton superfan Kaye bumps into the bespectacled star and happens to spend the evening with him.

It’s a night of confessions, anecdotes, jokes and – of course – fabulous songs. And Kaye is the biggest Elton John fan ever – so who better to sing and play Elton’s greatest songs and narrate this tall tale of an unforgettable celebrity encounter.

The show is the start of a new collaboration between The Bowdon Rooms, which recently underwent a million-pound renovation, and Katy Lipson for Aria Entertainment.

Martin Kaye said: “Having spent so much time performing away from Manchester throughout my career, it’s always pretty special to get the opportunity to play in my hometown again, and with a show that I think all my Mancunian friends and family will really really love! Katy Lipson and I grew up here, so it feels very much like a homecoming for both of us, and we’re really looking forward to working with Edward at his beautifully renovated Bowdon Rooms.”

Edward Prophet, co-owner of The Bowdon Rooms, said: “We are thrilled to be collaborating with Katy Lipson to bring this fantastic show to our magnificent venue, and are looking forward to several more exciting shows in the future.”

NEW DATES ANNOUNCED FOR MONDAY NIGHT AT THE APOLLO