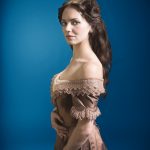 You do know what they say about twins, secretly parted, don’t you? They say that if either twin learns that he was once a pair; that they shall both immediately die.

This harrowing musical is a roller coaster ride of emotions for both the actors and the audience. Dealing with issues of love, loss, social class and pure tragedy Blood Brothers (written by Russell 34 years ago as a touring school production) will give you moments of sheer joy before bringing you to genuine tears.

From the most difficult choice a mother ever has to make to the innocent frivolous actions of school children, there is something that both young and old can relate to in this masterpiece. Produced by Bill Kenwright this really is a timeless show that can bring audiences to their feet again and again.

The beautiful Liverpool skyline made the perfect backdrop for the entire production and the rest of the permanent set, designed by Adam Walmsley, was the backstreets of Liverpool complete with alleyways and graffiti-laden walls.

Lyn Paul, former member of the 1970s band the New Seekers, has played the role of Mrs Johnstone regularly for the last 20 years. After watching her heartbreak when giving away one of her babies, her motherly tone with her unruly children and her sheer captivating rendition of Tell Me It’s Not True, it is not difficult to see why she has been voted by many as the definitive Mrs Johnstone.

The star of the show has to be Sean Jones who delivered a real masterclass as Mickey Johnstone. From the moment he stepped on stage as 7 (sorry nearly 8) year old Mickey, he had the audience in the palm of his hand. Watching him transform into a troubled, lustful teenager and then descend into madness after he enters adulthood is a spectacle in itself.

Playing Mickey’s estranged twin Eddie Lyons was Joel Benedict who the audience fell in love with. He played the mild-mannered, privileged, eager to please Eddie in a way that evoked the utmost empathy from the audience. Equally, Danielle Corlass as love interest Linda also depicted the progression from child to adult with ease creating a character both made us laugh and filled us with sympathy for her at the end.

Other stand out performances came from Adam Search as ‘our’ Sammy, Mickey’s wild older brother who leaped and bounded around the stage as a child and strutted around it as an adult. Dean Chisnall managed both sinister and sincere as the Narrator, creeping around in the shadows and half-light of the action.

Director Bob Tomson has created a masterpiece, keeping all the best bits of the well-loved production that we know whilst adding new flourishes to really make the show stand out.

To see Willy Russell’s Blood Brothers in Liverpool where the story was born is a real treat, but you don’t have to be in Liverpool to appreciate this musical. This ageless story could transfer to any location, at any time and still be met with a standing ovation from an adoring audience.