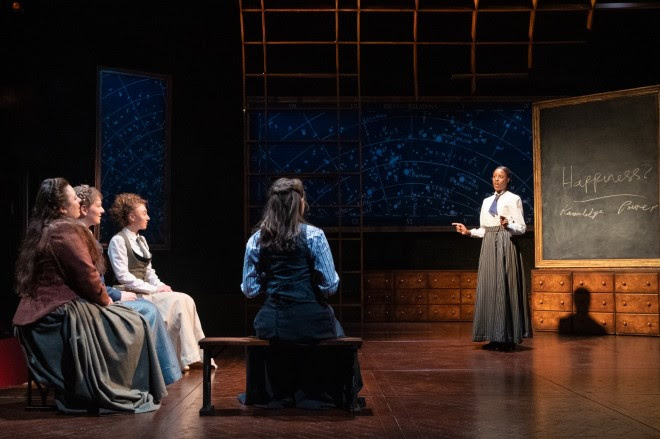 Feminism has a real significance in the theatre. This is evident to any theatre-goer, but its not often that you find a play that has those values of equality and justice at the core of its foundation, rather than someone putting a spin on an established play written without those ethics in mind.  It has been one hundred and twenty years since the setting of Blue Stockings, which begs the question: ‘what has changed in all that time?’ One would hope we’ve learned and grown since then; we’re closer towards a fair and just human community. And yet, as the Storyhouse Theatre displays thought-provokingly in the trailer for this production (which you can view here if you’re curious) – wild, outdated, and laughable statements of sexist rhetoric are held by some major politicians to this day. The tag line is fittingly ‘The Fight’s Not Over’. This production uses modern theatre practices in a period setting that provides astounding relevance to the world we know today despite its classic atmosphere.

Blue Stockings by Jessica Swale follows the experiences of four young women studying a variety of advanced subjects at Girton College in Cambridge in the year 1896. During this time, although they have shown acumen and brilliance in their fields – women do not yet have the right to graduate alongside their male peers, despite matching them grade for grade. The college rightly fights to rectify this issue within the establishment while the suffragette movement marches outside. The young scholars experience wonderful new opportunities as well as facing unenviable troubles during their time at Girton. Family pressures, new love, and the stress of higher education are all encountered while the looming political landscape floats overhead and pounds at the door. The characters encounter many different forms of struggle, which makes it all the more watchable as an audience, as the ladies overcome strife or fall under the pressure.

This production was a marvel from its design aspect. The set looks exactly how you think a classroom would look from this time; black chalk boards, wooden benches and heavy chests of drawers uniformly shape the space. From the moment you witness the space, you’re in 1896 without seeing a single person. But what’s more delightful is how a stage blocked with sturdy furniture and right angles at every corner, could flow like water in a stream. A good judge of set is how it looks in the middle of a scene as well as how it moves between them. It looked great, it moved great, it was great. The set is surprisingly adaptable despite seeming as hardy and rigid as a teacher that would work within it. The actors take full effect of its cunning design with captivating movement meaning the production never delays, keeping the story moving at a great pace. A subtle feature which added to the dynamic effect was the fantastic sound design; bird calls and shop bells would let you know exactly where you were before any actor said a word, giving us the focus to immediately follow the characters journeys.

A pro this play has that builds from its core theme, and that the actors take advantage of, is that the characters are passionate but for separate and fascinating reasons. It’s nowhere near a ‘boys vs girls’ dynamic. It’s interesting, motivated characters that are striving for their own success that makes the performances so engaging. It’s clear the actors have thought hard about their characters personal histories up to that point which informs each individual depiction. Polly Lister gave a powerful performance throughout as Mrs Welsh, the college’s head mistress, who had clear and passionate convictions which led to gripping scenes where her frustrations had let loose and would demand to be heard. The leadership and bite that her character displayed was hugely satisfying, and necessary as although tensions rise, all the build up from the mid to later scenes needed punch to follow up.

This production was engaging and thoughtful. The story and performances are reflective of a modern world with all its sparkles and stains without losing any of the classic spirit of its setting. It provides hope to those who struggle and gives real appreciation to the significant contributions of those who fought and continue to fight for true equality.

Blue Stockings is playing at Chester Storyhouse until 15th March.

About Post Author
Mattie Jenkins
Mattie Jenkins went to Liverpool Hope University for a Degree in Drama and Theatre Studies. He continues to contribute to theatre projects from Liverpool to Mold as an actor, director, and musical performer.

What we thought of The National Theatre’s One Man, Two Guvnors
Play
/