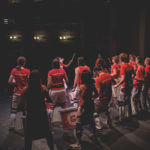 Brand-new theatre company represent., is announced with a mission to increase access to the industry for those from lower socio-economic backgrounds*. Inspired by the repertory model, represent. will offer six 18–30 year olds an acting apprenticeship where they can develop their craft on the job, earning a London living wage.

represent.’s inaugural season includes the European première of Stephen Jeffreys’ Interruptions adapted and directed by Guy Woolf with movement direction from Complicité’s Kasia Zaremba-Byrne and Annabel Arden, HMP Macbeth written by Darren Raymond after William Shakespeare and directed by Karen Tomlin, and Albatross written by Isley Lynn and directed by Jess Edwards. In connection with Albatross, Abigail Sewell will present Repfest; a festival of post-show work including poetry, live music and new writing from emerging artists with further details to be announced.

Creative Director of Represent Guy Woolf said today, “Represent is a new repertory company dedicated to redressing the socioeconomic imbalance in the industry. For our very first season we are so excited to present a diverse programme of 3 plays in a diverse set of venues , performed back to back, that will greatly challenge our cast of 6, who appear in each play while they rehearse the next one during the day! We are working with an extraordinary creative team, presenting two professional premières by Darren Raymond and Isley Lynn and a European première of a play by Stephen Jeffreys. We are also presenting repfest., programmed by Abigail Sewell, a festival of work by emerging artists to celebrate the launch of our bold initiative. Timely, disruptive and powerful: welcome to represent theatre!”

represent. is also working alongside Mousetrap Theatre projects to provide open rehearsals and workshops for schools, as well as releasing a limited amount of £5 tickets for under 25s for each show.

“I like to read about the comedy of the world. But there is no point any more in taking part. I believe in nothing.”

Interruptions shows an imaginary country preparing for an election, undergoing a military coup, and then living through the consequences. Originally devised by Annabel Arden and Stephen Jeffreys, represent. presents its UK première with a new adaptation for a smaller cast.

In her introduction to the collection Stephen Jeffreys: Plays (Nick Hern Books, 2018), Jeffreys’ wife Annabel Arden writes: ‘[Interruptions] sprang from [Stephen’s] fascination with the Japanese aesthetic principle of Jo-ha-kyu and his desire to create a particular narrative form to express our struggles with democracy and leadership.’ It asks the questions: Do we need to be led? How do we decide who leads? and What happens when there are no leaders?’

Stephen Jeffreys (1950 – 2018) was an internationally-acclaimed playwright and winner of the Evening Standard and Critics’ Circle Award for Most Promising Playwright. His theatre credits include The Clink (Paines Plough), The Libertine (Royal Court Theatre), A Jovial Crew (Royal Shakespeare Company), A Going Concern (Hampstead Theatre), I Just Stopped by to See the Man (Royal Court Theatre) and Bugles at the Gates of Jalalabad (Tricycle Theatre). For film his credits include The Libertine and Diana.

Guy Woolf is an actor, director and composer. Previous credits as an actor include 3 Guys Naked From The Waist Down (Finborough Theatre), Thrill Me (The English Theatre of Hamburg/Jermyn Street Theatre) and Becoming Electra (The Roundhouse/UK tour). He plays Electra in Cabaret Troupe Denim (Soho Theatre/Arts Theatre/Glastonbury), with TV credits including Trigonometry (BBC 2). His credits as a composer include Great Again (Tristan Bates Theatre/Vault Festival).

“Read your bible and say your prayers and it won’t be long till you’re home. Remember, angels are bright still, though the brightest fell.”

HMP Macbeth reimagines this classic, dispensing with king and castle, in a prison where institutional syndrome descends on the inmates.

Originally devised and written by Darren Raymond with Intermission Youth Theatre, based on Raymond’s experience, HMP Macbeth’s is an atmospheric, horrifying and immersive production.

Darren Raymond is the Artistic Director of Intermission Youth Theatre which was established in 2006. His credits include Shakespeare Walks, Sonnet Sunday and Voices in the Dark (Shakespeare’s Globe). He is a member of RSC’s Education Advisory Committee.

At The Smiths at The Vaults, Waterloo

“It’s not just the choice

Choice is a fairy-tale.”

Tattoos are forever. Almost. And at Noodle Soup Tattoo there are strict rules: No names unless they’re dead. Nothing on the face. Nothing you might get sued for later.

When Jodie, a rough sleeper, asks for a free tattoo from apprentice Kit, her request is well within the guidelines. But Kit is still unsure, because they know only too well that getting inked isn’t the only decision that stays with you for the rest of your life.

Albatross is a small but sweeping story about the past refusing to stay in the past.

A festival of work post-show, celebrating emerging artists and marginalised voices. Repfest will platform artists from a variety of disciplines in this unique space under the arches in Waterloo. A ticket to Albatross guarantees you a seat for the Repfest show that night!