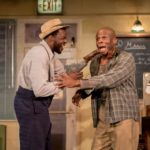 Sheffield’s award-winning Forced Entertainment return to HOME following their debut at the Manchester arts centre in 2017 with Real Magic performing Out of Order, which plays for three performances, Wednesday 13 – Friday 15 November 2019.

A troupe of hapless clowns sit huddled round a table, waiting for trouble to start, like friends divided or deadlocked politicians. There are old gags that escalate and new ones that backfire. Music, sweat and bright lights. Blank faces, double takes and bright ideas. For a moment it might look like peace, but soon it’s mayhem again.

Forced Entertainment’s reputation has been built by creating a world of absurd disconnection, struggle and comical repetition, at the same time as challenging audiences’ expectations of what is theatre. Driven by a heavy musical score, Out Of Order continues that tradition by teetering carelessly between funny and not funny at all, comical and absolutely tragic.

A kind of poetic State of the Nation rendered as clown act gone wrong, where we’re at and where we’re heading – Out of Order says it all without speaking. Out of Order sees regular Forced Entertainment performers and founder members – Robin Arthur, Nicki Hobday, Jerry Killick, Richard Lowdon, Cathy Naden and Terry O’Connor – combine for what is the company’s most physical performance ever. There is no spoken word in the piece and it features repetitive music and movement. It is challenging but also entertaining.

Themes in their work include mental health, masculinity, and relationships. In The Shadow, Company Chameleon explore the hidden parts of the unconscious mind and the darker side of our personalities.

Based on the premise that there is no tomorrow, and the behaviour that manifests with this knowledge, the narrative of The Shadow follows six characters and their shadow counterparts as they are swept into different stories and places.

As part of the character development for the production, choreographer Anthony Missen researched and delivered a series of workshops, which asked the performers to look at their own shadow through word association tests, tasks, and improvisations.

“The shadow is present in everyone,” explains Anthony Missen, “but we only see it when light shines in particular way. Psychoanalyst Carl Jung identifies the shadow as the unknown or unconscious dark side of our personality. Most of the time we don’t see it at all, or acknowledge it, but it’s always there if you look closely enough.

“Everyone has masks they present publicly which may or may not reflect what’s going on privately. We all prefer to put our best face forward. It is said that we all have three faces: our public face, the face that we show to our friends and family, and the face that nobody sees. It’s the latter that is supposedly our truest likeness, and this is what the piece explores.”

The Shadow features performances by an incredibly talented cast, including company dancers Theo Fapohunda and Juliana Javier, the  formidable Lee Clayden, Associate Artist David Colley, and Northern School of Contemporary Dance apprentices Lisa Ziemann and Reece Marshall. As a company committed to developing emerging dance talent, the shadows in the production will be performed by alumni of Edge Hill University and Bath Spa University.

Highly athletic and physically impressive to watch, audiences can look forward to a production encompassing a rich mix of dance styles and an innovative and fresh movement language, which carries meaning.