Frantic Assembly Announce Full Casting For I Think We Are Alone

Frantic Assembly announced the full casting for I Think We Are Alone, a major new play by Sally Abbott (The Coroner, Vera), co-directed by Kathy Burke (Lady Windermere’s Fan, The Retreat) and Scott Graham (Fatherland, Things I Know to be True). The work will premiere at Theatre Royal Plymouth on 3rd February and tour to venues including Theatre Royal Stratford East, The Lowry, Nuffield Southampton, Bristol Old Vic, and Leicester’s Curve in Spring 2020. The production sits at the centre of a year of programming celebrating 25 years of Frantic Assembly.

Two sisters (Charlotte Bate & Polly Frame) are estranged and bicker over text. Their brittle and aggressive language is pushing them further apart when what they really want is to meet, clear the air and talk about the events that happened when they were young girls and haunt them still.

Josie (Chizzy Akudolu) is not allowing grief to get in the way. All of her focus is on what is best for her son, Manny (Caleb Roberts). She desperately wants him to fly but can she let him go?

There is a person shaped hole in Graham’s heart (Andrew Turner) and it is driving him to some dark places. When a stranger returns an act of kindness both find themselves opening up and connecting in a way that might just bring a bit of light in.

I Think We Are Alone is a bittersweet and funny take on our ache to connect with those voices we need to hear again, those arms we need to feel around us and those faces we need to see again. It is about letting go and holding on to what we love the most.

The production is designed by Morgan Large with lighting by Paul Keogan, sound by Ella Wahlstrom and casting by Will Burton.

Charlotte Bate trained at The Guildhall School of Music and Drama. Her theatre credits include On The Other Hand We’re Happy,  Daughterhood and Dexter And Winter’s Detective Agency (Paines Plough/Theatre Royal Stratford East), Blackthorn (West Yorkshire Playhouse And Edinburgh Festival), The Rivals (The Watermill Theatre), King Lear (The Orange Tree Theatre), Watership Down (The Watermill Theatre) and Romeo And Juliet (Sheffield Crucible).

His television credits include A Very English Scandal (BBC).

Her television credits include Doctors (BBC) and Casualty (BBC).

Andrew’s film credits include Fantastic Beasts: The Crimes of Grindelwald (Warner Bros) and Is Anybody There? (BBC Films). 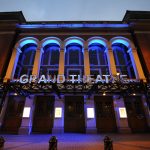 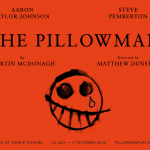