Grease has exploded back onto the scene this year with a UK Tour full of well known names and a big, bright marketing campaign – a mix that is ensuring full auditoriums.

An absolute musical theatre classic, many put Grease among their favourites.

This version though, is heavily focused on the large energetic numbers, benefiting from the hype of Grease rather than creating the hype itself.

The story of Grease is practically lost from the beginning as moments are thrown away or become quickly meaningless by a lack of quality across the board.

Darren Day and Danielle Hope are shining lights in this production. Hope delivers a beautiful “hopelessly devoted” and is generally strong throughout. Day is the steady, confident and charismatic character that you come to expect from such a likeable veteran of the stage.

When Danny and Sandy finally get together, there was no climax because there was no chemistry at any time. Tom Parker performed the entire show as if he was the member of a boy-band. Which he is. Unfortunately the incredible, sassy and troubled role of Rizzo is beyond Louisa Lytton.

The choreography feels partly dated but also it moved away from the authenticity of the production a little too far. There are signature moves that are cast aside for an almost unrecognisable style and I can’t help but feel true Grease fans will be disappointed with the authentic parts of the show that they came to see.

Even the slight changes of musical arrangements reduce, rather than add to the enjoyment – albeit a good band are on stage to play it.

The large numbers fail to save the show. Finishing on a megamix is a good idea to leave audience members happy – however this does have the effect of an ovation at the end that isn’t necessarily a true audience reaction to the show.

Unfortunately as often happens, the celebrity castings are far from the right ones. Whether they have sold more tickets because of it remains to be seen – but it is a very short term view even if that was the case.

The set is also unforgivably basic.

Leicester Curve under the leadership of Nikolai Foster and Nick Winston produced Grease as a Christmas production and it was outstanding from start to finish. This production was everything Grease can be. As it prepares to dazzle in dubai, growing the popularity of musical theatre in other parts of the world – I fear this UK Tour may have the opposite effect in the long term.

The company are more than good enough. Their energy and commitment is to be absolutely applauded.

The show tries to create “Rocky Horror Show” hype but it can’t get away with the basic acting and silly humour in the same way, because it’s not that kind of show.

There were many aspects of the production that I couldn’t enjoy and I can’t tell you how much I really wanted to before the show began.

It doesn’t sit well with me to write so negatively about a show, but unfortunately this production (for all it’s potential) is missing so much. If you’re happy to view a concert-style production then you will enjoy it. If you’re looking for the real, gritty Grease full of chemistry, mixed up teen emotions and it’s signature wow moments, this isn’t the one for you.

grease, liverpool empire, musicals, theatre
You may also like 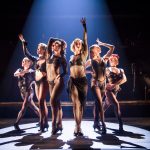