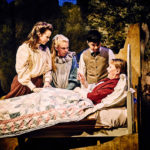 As Derren Brown prepares for his latest UK tour, he reflects on success, plans for the future and his fear of being overwhelmed.

Q: So, Derren, you’re back on the road again. Excited?

Yes – this was supposed to be a year off tour-wise but it hasn’t happened. I’ve been out doing a show in New York as well as Underground in London. It’s all been good fun.

Q: This is the 15th year you’ve toured.  Is it still as rewarding?

I enjoy it more each year. This show has been a lot of work to get it to where it is but I’m very happy with it and responses have been great.

Q: Tell us what you can about UNDERGROUND.

Importantly, it comprises of favourite routines from previous shows. It was born from workshopping a ‘best of’ show to take abroad to people who don’t know me. But it gained its own identity and people seem to really enjoy it even though they may have seen some or all of the previous shows from which the material is taken. Plus I guess there are enough surprises for it not to be too familiar. So I decided to tour it, albeit a smaller tour than I would if it were an entirely new show.

Q: How difficult was it to put together?

As the material was largely already in place from previous shows, the challenge was to make sure it held together and amounted, as we always try to make the shows, to more than the sum of its parts. Strangely, being already familiar with the routines made finding the narrative more difficult than usual. But I also work and write with my creative partners Andrew O’ Connor and Andy Nyman, who together direct the show – and between us we seemed to find what we needed to. It’s a great three-way relationship and very rarely does that ever become overtly sexual.

Q: If you had to choose, which show would you say you were most proud of?

I’ve put most work into this one, and I’m told by my little team that it’s the best of the lot.

Q: Over a million people have seen you perform on stage. Did you ever imagine that kind of popularity when you first performed live?

Ha! No. The first show I performed was a dreadful, structureless, self-indulgent hypnosis show for my fellow students at Bristol. My mum came up on stage and played along because she felt a bit sorry for me. Luckily I was so enamoured with myself that I couldn’t see how awful it all was. I hope I’ve gained some sort of slither of perspective since.

Q: We haven’t seen you on television for a while. Any plans for the small screen?

Yes it’s about time. I’m starting to think about it but nothing clear yet.

Q: Your book HAPPY has been very well received and many people have said it’s been very helpful in respect to their own growth and self-awareness. Has its success encouraged you to keep writing in a similar vein?

I loved writing it and very much miss it. I’m eager to write something else but Happy took three years to write and I don’t want to rush it. But yes, very much so. I’m assembling my thoughts at the moment around a topic I find compelling and we’ll see how it goes.

Q: Finally, your ghost train ride at Thorpe Park is scaring a lot of people. Tell us what scares you!

Most of us live with one of two basic fears: that of abandonment or being overwhelmed. I’m very much in the latter camp. I like my space and quiet pursuits, and am unhappy when people make demands on me. It means I’m good at avoiding stress but sometimes so good that I don’t really embrace new challenges. By comparison, someone with a fear of abandonment will tend to move towards stress to try and fix it, and will be prone to anxiety and taking too much on. I’m the opposite of that, which is why the Stoics (which I write a lot about in Happy) resonated with me so well.