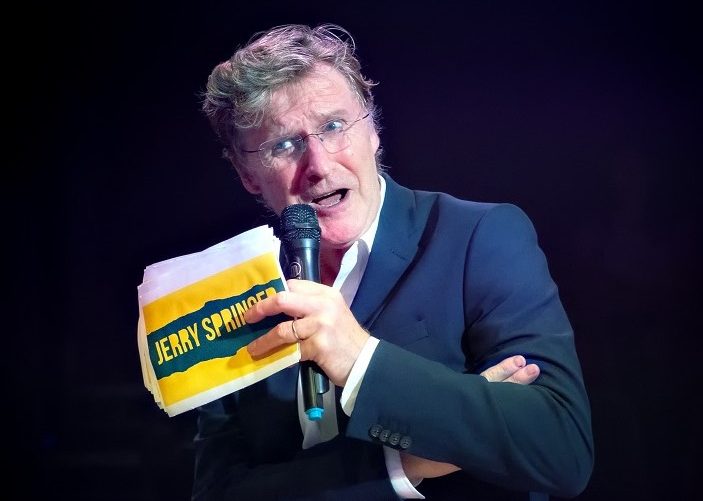 Blending a high class outstanding operatic score with the obscenely outrageous characters; the hotly anticipated Jerry Springer The Opera is at The Hope Mill Theatre causing ‘Jerry Mania’ to spread across Manchester until Saturday 31 August.

Based on The Jerry Springer Show which was first broadcast in 1991 and continued to be on air for 27 years, this musical extravaganza tells the story of the talk show host as he faces another crazy day in his career full of challenging guests, heckling audience members and a show that doesn’t turn out quite as he anticipated…

Whether you were an avid watcher of the series or just have an awareness of the American talk show hosted by Jerry Springer which was full of profanity and guests willing to make fools of themselves on national television, nothing can prepare you for this musical. It is an absurd and surreal experience from start to finish, and in the best possible way!

Northern Ricochet are passionate about producing quality theatre in the North, and have worked tirelessly to revive and present this controversial show – not seen on stage for 15 years. Produced by James Baker, Tom Chester and Bill Elms, this company champions Northern talent, this cast is made up entirely of Northern performers and performers in training all as the result of open-call casting – and we can see why they did.

The cast bursts onto the stage as the Jerry Springer audience, telling us that they want to see lesbians fighting, they want to see men who want to be women, they want to see partners confess their adultery… but why? This controversial musical turns the mirror towards us as a society and asks us why we want to watch these people at their very worst and why we are so keen to be a part of their ultimate downfall.

In this age of Brexit, Donald Trump and Boris Johnson, where we are used to controversy and shock from the people who hold all the power, this new revival of Richard Thomas and Stewart Lee’s show is poignant and as relevant to audiences today as it was 15 years ago.

When we go to the theatre we expect there to be an element of the outrageous, we expect that the boundaries of live theatre will be pushed, but this show throws everything that you think you know out of the window and starts again. From the (extremely) adult references to the devilish choreography by Sindy Richardson, every element of this show is certainly not for the faint hearted – or prudish – individual.

Particularly in the first half, where we meet everyone from the security guard to the most bizarre and embarrassing guests, the clever writing, the exceptional delivery from the cast members and the clever direction by James Baker will have you laughing, gasping and cringing in equal measure.

The intimacy of the Hope Mill Theatre certainly adds to how entertaining and uncanny this show is. Every single member of the cast gives 100%, and their facial expressions alone are worth a mention. Despite the small setting – designed by Victoria Hinton-Albrieux – it doesn’t feel cramped despite the 25 strong cast who under Tom Chester’s musical direction (and with the assistance of the 6 members of the live Jerry Springer band) make the most incredible sound.

The on stage choir not only provide stunning harmonies but also moments of comedy gold in the contemporary ‘ad breaks’ which offer an ironic commentary on the backward politics, false advertising and indulgent consumption of social media in modern western life.

Bearing a huge resemblance to the television personality is leading man and renowned actor Michael Howe as Jerry Springer. Howe is best known for his television role as Sebastian in the BBC series Solo alongside Felicity Kendall and Mr Wilson the barrister in Hollyoaks. He is perfect as Springer with all the characterisation of the popular talk show host, and has the opportunity to explore more of his character as he confronts his demons in the latter half of the show.

Matt Bond displays sensational vocals throughout as Dwight / God as does Emily Chesterton as Peaches / Baby Jane with an elegant poise.

Every single member of this cast has been chosen for their exceptional vocal ability, but what is striking is their aptitude to sing operatically whilst portraying such huge, farcical characters. Tom Lloyd is brilliant as both the Warm Up Man and Satan and his bizarre show down with David Burlin as Jesus – who is amazing in every role that he portrays – is truly a spectacle to watch.

CiCi Howells is incredible as Shawntel / Eve – her vocals are stunning, bringing a rocky edge in her solo numbers.

Andrew Patrick-Walker as Tremont / Angel Gabriel also hits some insanely high notes in the first half and is an outstanding actor.

The musical is entirely sung through, and reaches moments of pure absurdity particularly in the second half. After the outrageous brilliance of the first half the show takes a change of tact for the second half, with more of a story-line that remains as utterly outrageous but settles the audience somewhat.

Be warned – there is profanity, (near) nudity, offensive content and more – making for an incredible night’s entertainment!

Jerry Springer The Opera is at The Hope Mill Theatre until Saturday 31st August.