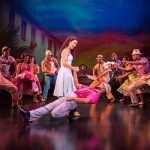 It’s the famous story of Joseph, the favourite of Jacob’s 12 sons, being sold by his jealous brothers into slavery who finds his way to wealth and riches as the Pharaoh’s right hand man.

Presented in spectacular style – the show includes some of the most well known songs in theatre including “Close Every Door” and “Any Dream Will Do”. It has been a firm family favourite for many years, enjoying it’s peak in the 1990s when acts such as Jason Donovan took on the title role. It continues to attract young stars and this tour is no different as Jaymi Hensley takes on Joseph.

Hensley is a refreshing Joseph. He has the look, he has the stage presence and he powers through this incredible score with his exceptional vocals – bringing his own unique style in a way that feels so authentic. There have been some phenominal people in this role and Jaymi Hensley is worthy of it. From start to finish he is a class act and wonderful to watch.

You know what you’re getting with Joseph, it seems to have been touring forever but shows no signs of slowing down! This is partly due to a musical score that is impeccable and has stood the test of time, but is no doubt a right of passage for school children who enjoy the show almost as much as the adults that are accompanying them. Many of the school children end up on stage as part of the show, which must be an incredible experience for the youngsters who sing beautifully to accompany the main action.

From the outset, the show is narrated by Alexandra Doar, making her professional debut. This is a great casting, delighting the audience with her strong yet soft vocals. She plays the Narrator as a background character, never overshadowing the action on stage despite her incredible voice. She has alot more to give and will no doubt get the opportunity to do so.

One of the unlikely highlights of the production is the 11 brothers. They look like they’re having a great time and they give the audience a great time too. Completing the cast are two female ensemble and the father role. Between them, they play all the roles well. It’s pitched just right, never taking itself too seriously. This is light entertainment presented by a quality cast from an experienced Producer.

There are parts of the script that perhaps need refreshing, but in all, the show is everything that you expect from a production that is still standing the test of time. The star factor and love for the show is almost certainly what keeps the full houses on their feet every night and it will always be a very enjoyable musical for all the family.

Maybe you’re a huge fan of the show, or maybe you’re introducing a young person to their first musical, either way you will not leave disappointed.

Joseph and his Amazing Technicolor Dreamcoat will continue to delight audiences at the Crewe Lyceum until Saturday and you can catch it til January at a theatre near you. Buy Tickets here…

BIG, The Musical, it’s not just for grown ups!