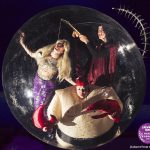 Mischief Movie Night In, is being streamed live this summer from now until 1 August 2021, with tickets also available to join the strictly limited studio audience at London’s Riverside Studios. For more information on the streaming and in person tickets please visit mischiefmovienightin.com

You still decide the genre, the location, and the title – and remember, every performance is a completely different show! Book for a regular Pay-Per-View Pass, Participation Pass or join us in the studio for these hilarious nights-in (or out) wherever you are!

The cast will include Mike Bodie as Need to Check, Joshua Elliott as TBC, Dave Hearn as No Idea, Harry  Kershaw as Couldn’t Tell You, Henry Lewis as Not Sure, Niall Ransome as Guess Who, Charlie Russell as Don’t Know Yet, Jonathan Sayer as ???, Lauren Shearing as Who Knows, Henry Shields as I Suppose  We’ll Find Out and Nancy Zamit as Wait and See.

They will be joined by musicians Richard Baker, Yshani Perinpanayagam and Ed Zanders.

This new run will include Sequel Sunday on 18th July and a binge-worthy Trilogy Day on 31st July. After the 5.00pm movie, audiences can make suggestions for what happens in the sequel – we’ll then improvise it that same evening at 8.00pm, and 11.00pm on the Trilogy Day.

Mischief Theatre Ltd. was founded in 2008 by a group of acting graduates of LAMDA and began as an improvised comedy group. Mischief performs across the UK and internationally with original scripted and improvised work and also has a programme of workshops. Mischief is delighted to have The Play That Goes Wrong returning to the Duchess Theatre from 18 June 2021 as well as a UK tour commencing this July alongside tours of Magic Goes Wrong and Groan Ups this summer. Their recent six-part TV series called The Goes Wrong Show was aired on BBC One and the second seriesis currently in production. The company is owned and controlled by its original members and is led by a creative group and its directors Henry Lewis and Jonathan Sayer.

Rehearsal images released for the UK stage premiere of the imitating the dog and Leeds Playhouse production of Dracula: The Untold Story