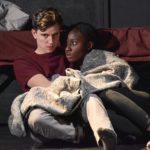 Jon Culshaw will star as ‘Bill Bryson’ in a brand-new stage production of Bryson’s award-winning memoir NOTES FROM A SMALL ISLAND adapted by BAFTA and Olivier Award winning playwright Tim Whitnall. Directed by the Watermill’s Artistic Director Paul Hart, the production will have its world premiere in Newbury on Thursday 24 September and play until Saturday 31 October, with a national press night on Monday 28 September. The production will then tour to Malvern, Cambridge, and Richmond, with further dates to announced.

What makes us love this country we call our own?

Join Bill as he journeys from Calais to Scotland, rediscovering the green and pleasant land he calls his home, before moving back to his native United States. Why does the nation that produced Marmite, Gardener’s Question time and people who say ‘Ooh lovely’ at the sight of a cup of tea, hold such a special place in his heart? And what precisely does he love so much about a country with place names like Farleigh Wallop, Titsey and Shellow Bowells? A witty and insightful tribute to all the head-scratching quirks and idiosyncrasies of our small island, that will leave you feeling positively proud to be British.

Notes from a Small Island spent three years in the Sunday Times bestsellers list, sold over two million copies and was voted on World Book Day by BBC Radio 4 listeners as the book that best represents our British identity.

Bill Bryson said, “I am naturally intrigued and excited to see how Notes from a Small Island will be translated into a theatrical experience. I am especially delighted that Jon Culshaw will be taking the lead role.  I have no doubt that he will be a better me than I am!”

Jon Culshaw said, “It’s a great pleasure and honour to have chance to portray Bill Bryson. His delicious wit makes preparing the role an absolute joy.”

Jon Culshaw is warmly regarded by many as one of Britain’s best impressionists with an unmatched versatility and a catalogue of over 350 voices and impersonations including Boris Johnson, Donald Trump, Professor Brian Cox, Barack Obama, Alan Carr, John Bishop and Michael McIntyre. Jon is a regular guest on current affairs programmes, providing comic relief with impromptu impersonations of politicians and commentators. BBC Radio 4 comedy Dead Ringers is now onto its 19th series and he is also in demand for voicing audio books including ‘The Beautiful Poetry of Donald Trump’ as well as many of the Dr Who releases.

In a further departure from comedy he played the iconic David Bowie in an acclaimed BBC World Service radio drama before turning his hand to a Terry Pratchett audio drama for Audible, The Unseen Academicals.

Following a sold-out debut tour, Jon is about to embark on his third UK tour The Great British Take Off with Dead Ringers producer, Bill Dare, which sees them perform an evening of unscripted, unrehearsed, spontaneous comedy and conversation.

Bill Bryson was born in Des Moines, Iowa, in 1951. Settled in England for many years, he moved to America with his wife and four children for a few years but has since returned to live in the UK. His bestselling travel books include The Lost Continent, Notes From a Small Island, A Walk in the Woods and Down Under. His acclaimed work of popular science, A Short History of Nearly Everything, won the Aventis Prize and the Descartes Prize, and was the biggest selling non-fiction book of the decade in the UK.

Tim Whitnall wrote the stage plays HARRY’S WEB – Theatre Royal Windsor 2000, THE SOCIABLE PLOVER – Old Red Lion Theatre 2005, THE FABULIST – Old Red Lion Theatre 2006, and ROADKILL – a reading at Paines Plough in 2007. His comedy, MORECAMBE, debuted at the Edinburgh Festival in 2009, winning a Fringe First Award. Transferring to the Duchess Theatre, London the show triumphed in the 2010 Laurence Olivier Awards, winning for Best Entertainment. Published by Samuel French, the play continues to tour in venues across the UK. Through his company, Feather Productions (www.featherproductionss.com) Tim co-produced PAXO – a one-man entertainment starring Jeremy Paxman – which enjoyed a sell-out run at the Pleasance Theatre, Edinburgh as part of the 2014 Festival Fringe. ONCE SEEN ON BLUE PETER (Cahoots Theatre Co.), Tim’s “play-within-a-play” celebrating the diamond anniversary of the iconic BBC children’s TV series (and starring six of the programme’s ex-presenters) premiered at the 2018 Edinburgh Festival Fringe. LENA, Tim’s drama detailing the rise and fall of former child star Lena Zavaroni, is scheduled to open in autumn 2020 at the newly refurbished Rothesay Pavilion, Isle of Bute, Scotland. His original comedy, FLYING DUCKS, will also premiere at the Theatre Royal, Bury in September this year, presented by the Summerseat Players.

Tim’s first feature film, THE HIDE, was completed in 2008 by Poisson Rouge Pictures/ Solution Films for Film Four, receiving its TV premiere in 2009 and subsequent cinema release at the ICA. The film made the TIMES TOP 100 LIST and was later released on DVD. Tim was nominated for his work in the 2010 Writer’s Guild Awards in the Best First Feature Length Screenplay category. In 2018, Tim’s company, Feather Productions, co-produced GONE, a short film written by Laurence Akers, starring Suranne Jones and Daniel Betts. The work has been screened successfully at several major international film festivals including from Oxford to Manhattan (via San Diego Shorts). Tim has recently been commissioned by Evolution Productions/ Wrekin Hill (LA) to write the screenplay for BRING ME SUNSHINE, a feature-film adaption of his play, MORECAMBE, slated for production later in 2020.

Tim has recently been commissioned by BBC / Cosmopolitan Pictures to write an episode of their BBC One crime drama, THE MALLORCA FILES. He is currently developing a number of major TV projects with several independent production companies including ITV Studios, Various Artists Ltd and Moonriver Content/E1.

Paul Hart is Artistic and Executive Director of The Watermill.

As Associate Director for Propeller: Pocket Henry and Pocket Merchant. Also: UK and International Tours of Henry V, The Winter’s Tale, Richard III, The Comedy of Errors, A Midsummer Night’s Dream and The Merchant of Venice.

As resident Assistant Director at The Donmar Warehouse: Red (also Broadway), Life Is a Dream, A Streetcar Named Desire, A Doll’s House and Dimetos.

As Staff Director at the National Theatre: The Captain of Köpenick (NT Olivier).

He has also directed: The Revenger’s Tragedy (LAMDA); Love’s Labour’s Lost and The Fall of the House of Usher (Rose Bruford College); Boys (Guildhall School of Speech and Drama). Radio includes: Existentialism in Theatre (The Essay, Radio 3). He started his career as an apprentice director at the Theatre Royal Haymarket and as Assistant Director at the Menier Chocolate Factory. Training: Theatre Directing at Rose Bruford College.

NOTES FROM A SMALL ISLAND is produced by Simon Friend and Hanna Osmolska and the Watermill Theatre. Further casting and creative team to be announced.