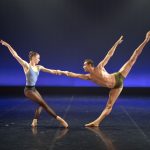 “On Your Feet” kicked off it’s UK Tour by Salsa dancing it’s way into the Theatre Royal, Nottingham to tell the story of the romance between Gloria and Emilio Estefan and the worldwide success that came from it.

Directed by Jerry Mitchell who is no stranger to a new musical, having most recently directed Pretty Woman on Broadway, and notably, last years UK tour smash hit: Kinky Boots.

Based on the book by Alexander Dinelaris, this brand new show follows a familiar but likeable format based upon one of the most remarkable careers and back catalogues of the 20th century. If you’re a fan of Estafan’s music, or the latin american scene that she participated in and inspired, then this musical is without a doubt for you – but this is also a production that will please the wider theatre-loving public.

Having moved to Florida at a young age to avoid the troubles in Cuba, Gloria  (played convincingly by Philippa Stefani) spends her time writing songs in between college, housework and caring for her father who has developed MS.  Her mother (also Gloria – played by Madalena Alberto and delivering an impressive vocal performance), having missed out on a career in singing herself because of this emigration, is totally against things when a young Emilio (George Ioannides continuing his West End role) approaches Gloria to join his band. However, her Grandmother (played by Hollie Cassar for this performance) realising how her own daughter missed out on her chance of fame, offers nothing but encouragement and Gloria finally joins the renamed Miami Sound Machine.

It is worth pointing out that the timeline is rushed at times, it is occasionally difficult to keep up with the story, but this is largely forgivable.

The story follows their major success in the Latin countries of South America but also Emilio’s drive to bring their music to the rest of the world. A particularly strong moment of the show is when near tragedy strikes – when a motorway crash involving their tour bus leaves Gloria with a broken back requiring a major operation and the prospect of never walking again. That operation and subsequent 6 months of physio has Gloria back on her feet and the finale of the show is her comeback appearance at the American Music Awards.

At the end, of course, there is the chance for the whole audience to get on their feet and dance to a medley of upbeat classics.

This is a strong, energetic piece of theatre, with a large high calibre company who really deliver the goods. The band (led by Musical Director Danny Belton) recreated the Miami sound perfectly. This feel good musical will leave you feeling high on life. The cast create an electric atmosphere that will no doubt delight audiences throughout the next year of their tour.

On Your Feet plays the Nottingham Theatre Royal until Saturday 21st September. To book tickets to this or any venue on the tour, click here.

Robert is a music contributor to At The Theatre. A regular concert-goer and music fanatic.