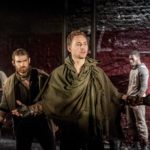 Once – The Musical UK Tour

Based on the 2006 cult Irish indie film of the same name by John Carney, Once is the breathtaking musical with a book by Enda Walsh, featuring exceptional music and lyrics by the original stars of the film – Glen Hansard and Markéta Irglová.

A talented busker on the streets of Dublin is ready to give up on his dream when a captivating young Czech woman takes an interest in his love songs and though he is musically and lyrically finished with the songs, they are not quite finished with him. We watch their chemistry and musicianship flourish, in this complex modern folk tale that is more than an ordinary love story.

The 16 strong cast are already on stage in full swing when the audience enter the auditorium, in the middle of a ‘trad sesh’ – an amalgamation of traditional and modern Irish folk songs where the musicians join in sporadically when they know the tune.

There is no woodwind or brass to be seen here, strings and percussion are the order of the day, with a blend of foot stomping jigs, reels and tight knit harmonies, the music is a masterclass in Irish folk music.

The ensemble are reminiscent of the Greek chorus – never leaving the stage – they are always watching, living and breathing with every moment of action on stage. They are the orchestra and all the supporting characters, and add a real layer of depth to the show.

This production electrifies the atmosphere sending a collective shiver down the spine of the auditorium, particularly when the cast sing a jaw-dropping a cappella number in the second Act.

Daniel Healy is perfect as Guy, his voice is beautifully raw and we are utterly in his grip as we watch him pour his heart and soul into each song. There is a high quality and polish to Healy’s performance, it is therefore not surprising that he has so many credits including having been the understudy for Ronan Keating in Once at the Phoenix Theatre as well as touring with him and co-writing six of his songs.

Emma Lucia as Girl is the perfect blend of head-strong yet vulnerable, a quirky young mother of a unique breed. No stranger to the role, Lucia plays the character with a stirring warmth and quality which is paralleled in her singing and playing.

The show is slow moving narratively, the emphasis is on the music and the lyrics, and so it should be. This musical based on the micro-budget film re-writes the rules of the musical, with rough bitter-sweet numbers led by distinctive three dimensional characters.

The set is simple and beautifully crafted, allowing us to be in several different locations throughout the story in moments. Scene changes are swift and the musicians frequently bring back the haunting Academy Award-winning melody ‘Falling Slowly’.

The show is cleverly directed by Peter Rowe, with poignant movement from the ensemble who manoeuvre as one, punctuating key moments in the narrative.

This is a modern love story about a Guy and a Girl, told effortlessly through original music that sounds as if the actors are playing and singing every note for the very first time.

Once is at The Liverpool Empire until Saturday 25 January. To book tickets click here