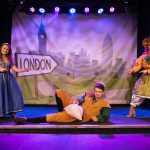 Photography released for Living Spit’s Beauty and the Beast at Bristol Old Vic. Opening this week.

Westcountry comedy duo Living Spit are hard at work this week preparing for the opening night of their Christmas knockabout caper Living Spit’s Beauty and the Beast on Friday.

Currently there is still no news as to whether the pair will be performing to a live audiences in the theatre or a digital one sat at home, but one thing’s for sure – the laughs won’t suffer.

They released photographs of the new production today.

The classic French tale of Beauty and The Beast tells of a bright and beautiful young woman who is taken prisoner by a beast in his castle. She learns to look beyond the Beast’s hideous exterior and realise the kind heart and soul that lies within.

The enormously popular Living Spit stars Howard Coggins and Stu McLoughlin. Howard is beautiful. There’s no escaping that. But then so is Stu. In fact, Living Spit is widely known as the most physically attractive two-man musical comedy theatre company in the South-West. However, in this tale as old as time one of them will have to portray an ugly, foul-tempered beast. But which one will it be?

Due to Bristol sitting in Tier 3 restrictions, all live theatre performances have been postponed. However, this Friday and Saturday, Living Spit will bring their brand-new musical show to homes across the country via a live-stream performance. All the jeopardy of live theatre, without the queues for the bar!

The live-streamed performances take place on Fri 18 Dec at 8pm and Sat 19 Dec at 2pm & 8pm. The stream will be brought to viewers via the Bristol Old Vic website and will be available to watch on any device, including many Smart TVs.
www.bristololdvic.org.uk/whats-on/living-spits-beauty-and-the-beast