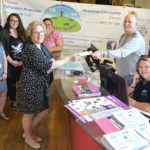 Ambassador Theatre Group (ATG) has appointed Sheena Wrigley in the role of Theatre Director at the twin venues Manchester Palace and Opera House.

Sheena will be joining the team in Manchester in November from her current role as Executive Director at HOME, Manchester’s new £25million arts centre. HOME has recorded two million individual visits since opening in 2015.

Sheena has worked across a range of venues in the North of England. Her roles have included the posts of Chief Executive of the West Yorkshire Playhouse in Leeds as well as Head of Theatres, Arts and Festivals in Bradford. Before her Bradford role Sheena was Chief Executive of Harrogate Theatre. Sheena is also a Board Member of UK Theatre.

Richard Wingate, ATG Business Director (UK Venues), said: “Sheena Wrigley has a wealth of experience in theatre leadership across the North of England, most recently at the superb HOME, and I’m delighted that she’ll be joining us later this year as Theatre Director at the Palace and Opera House.”

Discover Hidden Histories At Belgrade Theatre During The Summer Holidays