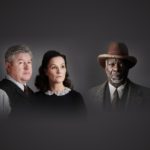 The history of England jumps off its axis. 2am, 8th July, 1981, all the major cities of England burn,

The Political History of Smack and Crack is an urgent, angry, funny love-song to a lost generation crushed by the heroin epidemic at the height of Thatcherism. Following sold-out runs at Soho Theatre and Edinburgh Fringe Festival, this acclaimed production, produced by Alastair Michael, Offstage Theatre and Most Wanted, and co-commissioned by Soho Theatre, begins its UK tour this January.

Inspired by the writer’s own experience in jail and rehab, Ed Edwards’ shattering portrait lays bare the passage from the 1981 Moss Side riots to survival on the present day streets of Manchester. Two-time Offies nominee and Winner of Summerhall’s Lustrum Award, The Political History of Smack and Crack, directed by Cressida Brown, crackles with rage, humour and authenticity as it candidly sheds light on the road to recovery.

This vital two-hander traces a pair of star-crossed lovers from the epicentre of the mass violence and rioting to masterfully detail the moments that lead them to become recovering addicts on those very same streets nearly forty years later. The Political History of Smack and Crack brims with spirit and compassion as it illuminates the ways in which ordinary people bridge the gaps left behind by the state’s failure to provide tangible support.

In a time of unprecedented political uncertainty, the true cost of austerity and widening inequality is coming to light. As councils are forced to make deep cuts to addiction services, the production is a rallying cry that seeks to unearth the entangled political roots of a generation ravaged by addiction.

Edwards comments, “Most plays I’ve seen about heroin show the horrors and the degradation of the experience from the personal perspective as if hard drugs have just fallen from the sky. We see some smackhead heading for the bottom and then getting better – again as if by magic. I wanted to show two things differently. Firstly, that the smack – and in its wake crack – didn’t appear from nowhere: they appeared at a particular time for a particular reason and that reason is political. Secondly, I wanted to deal with addicts in recovery – mainly because most of the addicts I know are in recovery – and I wanted to show the madness that goes along with stopping using drugs. I also wanted to depict a fucked-up relationship because this is the only type of relationship I know. I wanted to make people laugh and make people cry.”

The Political History of Smack and Crack will once again by partnering with Manchester charity Mustard Tree, to support their vital work in combating poverty and preventing homelessness across Greater Manchester.