The Rise and Fall of Little Voice – Theatre by the Lake 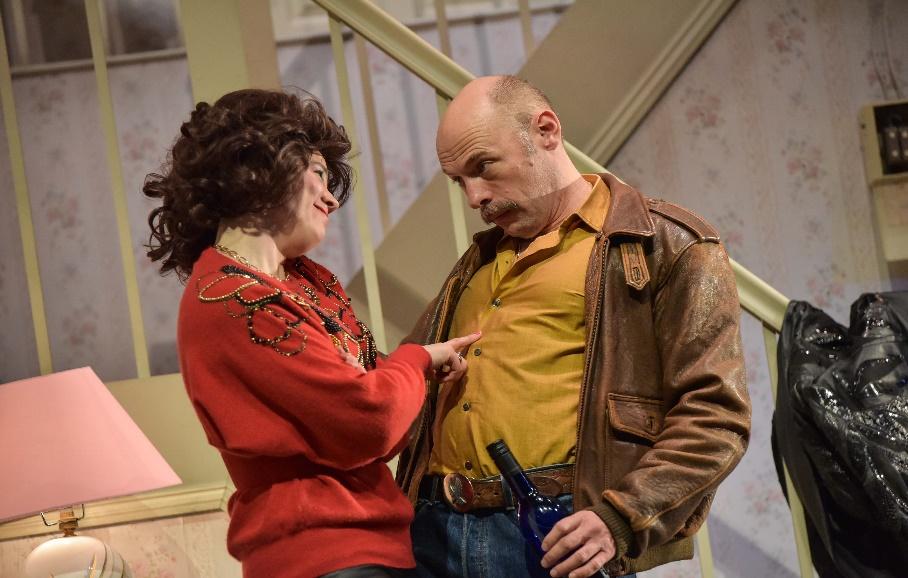 The Rise and Fall of Little Voice may be known to many as a successful British film made in 1998, starring Michael Caine, Jane Horrocks and a host of British stars on the back of the screenplay written by Jim Cartwright. This production may not have the big names of the film, but it still delivers in story-telling and comedic value.

The audience are welcomed into the auditorium and invited into Little Voice’s ‘family’ home. There are many clues to the era – a small portable TV, large Ghetto Blaster on the fridge and period kitchen units. There is an insight into the family that live here – bottles of alcohol dotted around the rooms, multiple plugs in a single socket, dishes lying around the sink.

As with many plays and comedies, it can take a few moments to ‘tune into’ the scene – but from the outset the audience are completely immersed in the story line, carried along by the energy of the performance of LV’s mother, Mari. Emily Pithon works tirelessly in the role to portray the drunken, downtrodden, desperate woman who has a running battle with her daughter as their personalities clash constantly.

Chris Porter plays Mari’s love interest Ray – the typical open shirted ‘medallion man’ and would-be agent to the ‘stars’. The ongoing chemistry and spark between Ray and Mari was an absolute joy to watch – both verbally and physically amusing, causing many a belly laugh!

As the first act progresses the audience start to get a taster of what LV can do with her voice, such a remarkable talent. Joëlle Brabban plays the role perfectly; the oppressed child that has given up her fight and settled for living within herself.

Act Two takes off to another level, we swap between the family home and the local club with host Mr Boo, played lovingly by Eric Potts. He engages with the audience in typical compère fashion, bringing his life experiences to deliver this role like a true professional.

Throughout the show there is a developing friendship between LV and Billy (Luke Murphy) who is a similar character to LV and first appears at the start of the show helping install a telephone to the house. Billy’s character develops as the show progresses and you see that he too lives in his own world, but has a very caring nature and this blossoming romance is a joy to watch.

When tragedy strikes, emotions are pulled this way and that. Mari’s long suffering best friend Sadie (the most inoffensive woman ever) played by Asha Kingsley is unfairly treated by the whirlwind that is Mari. Sadie has very few words in the play but her constant support to the family is endearing to the audience, and Asha’s small contribution is well portrayed.

As you would expect from Director Zoë Waterman the cast are all well-versed in the show and their characters, and it’s a testament to her how well this show is delivered.

This play is well worth a visit, it is a thoroughly enjoyable evening out, full of wonderful songs,is extremely well acted and totally immerses the audience right up to the last scene; where you finally get to hear the ‘real’ Little Voice.

This production at Theatre by the Lake in Keswick is one of their six show summer season; the small cast do an excellent job and have the ability to make you laugh out loud, wipe a tear from your eye or even have you thinking about your own life and experiences.

Whilst the season is drawing to a close – there is still time to catch all of the summer season shows which are rotated daily. We cannot recommend these shows enough.

The Rise and Fall of Little Voice plays at Theatre by the Lake until 1 November.